How to Decode Your VIN 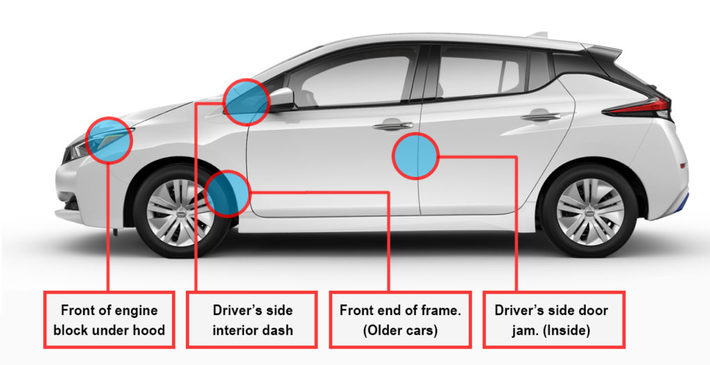 VIN information is organized in groups, and a search of your vehicle identification number can tell you a lot about your car. There's even a bit of fraud detection in the VIN, in the form of the "check digit," described below.

The first group of three numbers and letters in a VIN make up the world manufacturer identifier (WMI).

In this group, the first digit or letter identifies the country of origin. For example, cars made in the U.S. start with 1, 4 or 5. Canada is 2, and Mexico is 3. Japan is J, South Korea is K, England is S, Germany is W, and Sweden or Finland is Y.

The second element in this group tells you about the manufacturer. In some cases, it's the letter that begins the manufacturer's name. For example, A is for Audi, B is for BMW, G is for General Motors, L is for Lincoln, and N is for Nissan. But that "A" can also stand for Jaguar or Mitsubishi, and an "R" can also mean Audi. It may sound confusing, but the next digit ties it all together.

The third digit, when combined with the first two letters or numbers, indicates the vehicle's type or manufacturing division. This Wikipedia page has a list of WMI codes.

The next six digits to check (positions 4-9) are the vehicle descriptor section.

Numbers 4 through 8 describe the car with such information as the model, body type, restraint system, transmission type and engine code.

Number 9 is the check digit, which is used to detect invalid VINs. The number that appears varies and is based on a mathematical formula that the U.S. Department of Transportation developed.

The following group of eight elements (10-17) is the vehicle identifier section.

The letter or number in position 11 indicates the manufacturing plant where the vehicle was assembled. Each automaker has its own set of plant codes.

The last six digits (positions 12 through 17) are the production sequence numbers, which each car receives on the assembly line.

When we did a search for the VIN of another former test vehicle, a 2011 Chevrolet Volt, there was a hidden bit of trivia in the fuel type. It erroneously says that the Volt can run on E85 ethanol in addition to gasoline. It can't and it won't anytime soon.

General Motors originally intended to launch the Volt with a flex-fuel variant, but the emissions package was not ready for the car's introduction, according to the automaker. The E85 compatibility apparently was incorporated into the VIN data before GM decided a flex-fuel version wouldn't be ready in time for 2011. Since then, no flex-fuel version of the Volt has surfaced.

We were curious what the VIN looked like on an electric vehicle, so we did a lookup to decode the information for our former 2013 Tesla Model S. The search information we got was pretty thin. It goes to show that your results may vary, depending on what the carmaker supplies. We actually might have stumped the VIN decoder tool: It wasn't able to identify Tesla Motors as the manufacturer. It also doesn't show anything about it being an electric car.

The 2012 Fiat 500 is a reminder of just how globalized automakers have become. Fiat Chrysler Automobiles is an Italian-American multinational that manufactured the 500 at Chrysler's plant in Toluca, Mexico.

Notice that the 10th element in the VIN is "C." The letter represents the 2012 model year, but it could also mean 1982. Because the year is represented by one character (letter or number) and the VIN can only contain 17 characters, the code for a car's year has to be recycled every 30 years. So while one letter can represent more than one year, it should be pretty obvious whether you've got a 1982 or a 2012 — or 2042, for that matter.

Finally, here's a bit of vehicle history on a 2011 Ford Mustang GT. Notice that the manufacturer isn't listed as Ford Motor Co. Ford didn't get bought out like Chrysler. The AutoAlliance International Inc. was a joint venture between Ford and Mazda that produced the Mustang and the Mazda 6 for a while at a plant in Flat Rock, Michigan. Newer Mustangs list Ford as the automaker.

Other than VIN decoding to learn an automotive pedigree and some key specifications, you can use those digits for less entertaining but more important reasons involving its title, registration and insurance. Another critical use of a VIN is to obtain a vehicle history report for cars you're considering for purchase. Before you buy a used vehicle — even if it's from a dealer - it's important to get the VIN and use it to run a history report using Ford VIN decoder on our website. The reports can reveal if the motor vehicles you're considering have been reported stolen or if they have salvage titles. There are several types of reports to choose from. Read "Which Vehicle History Report Is Right for You?" to decide.