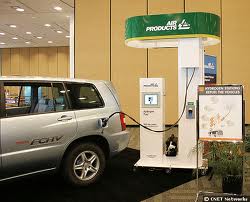 Fuel cell cars have the potential to reduce the demand for foreign oil and lower the harmful effects it has on our climate. Fuel cell cars run on hydrogen rather than gas and their exhaust doesn’t put out any harmful fumes, just water and heat. A lot of challenges will have to be overcome before these vehicles can compete with hybrids technology and regular gasoline vehicles. But the benefits of this cars technology would be very substantial to our environment and everyone living in it.

Conventional vehicles produce a significant amount of air pollutants that contribute to smog and other harmful particles in the U.S. The hydrogen is produced by fossil fuels resulting in some pollutants, but much less than other vehicles.

Fuel cell cars would decrease the demand for foreign oil. Since hydrogen can also come from domestic sources such as natural gas, coal and water. This would make our economy less dependent on oil transport from other countries and we would be less vulnerable to price shocks from the increasingly volative oil market.

Most fuel cell cars can store enough hydrogen to travel as far as a gasoline-powered vehicle would between fill ups, (approximately 300 miles), but this would have to be achieved without compromising the amount of space you would have, the performance, and the technology in the car. All these factors would definitely affect the price. Manufactures are trying to make fuel cell cars more reasonable in price, by bringing down production cost, fuel cell storage, and hydrogen storage to complete with conventional technology.

Fuel cell systems are not yet as durable as internal combustion engines, especially in some temperatures and humidity ranges. Their durability in the real world environment is currently half of what it is needed for commercialization. Their life span has increased a lot over the years, from 29,000 miles to 75,000 miles. Experts are hoping for 150,000-mile lifetime expectancy necessary for fuel cell cars to compete with gasoline-powered vehicles.

New facilities would have to be constructed for producing, transporting and dispensing hydrogen to consumers. Fuel cell technology would have to be embraced by the consumers before its benefits can be realized. Many people may be concerned about the safety of these vehicles, many people were also very skeptical about hybrids and they have worked out just fine. So we should definitely give the fuel cell cars a chance; they could change our economy and environment for the better.