The Banks Report is making its analysis of the deal available today at: http://www.thebanksreport.com/quarterly-report.html.

it's the biggest deal since 2002 when Sonic bought the Massey Group, and is the second monster deal in the last couple of weeks -- David Wilson Automotive acquired Fletcher Jones' Las Vegas Toyota store for $75 million two weeks ago.

Report on 2013 Dealership Acquisition Activity published by The Banks Report

Below is just some of the data you'll find in the report:

(Report includes industry's most comprehensive list of dealership acquisitions in 2013)… 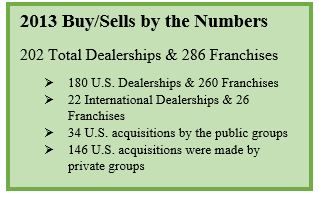 Want to Own a Piece of AutoTrader? Here's Your Chance

Last night, AutoTrader filed registration papers with the Securities Exchange Commission to go public. The IPO is slated to start at around $300 million, and will be used to pay off debts, according to AutoTrader.

The company did not indicate how many shares (they will be common stock) or at what price they will be offered. Neither was a date provided, but it should happen before the end of the year.

Last October, I gave the keynote presentation at the AICPA conference in Phoenix (going on today and tomorrow in Orlando). In it, I mentioned the OEMs' continued insistence on of "forcing" expensive facility upgrades on their dealers.

Grand Theft Auto – How Citizens Fought for the American Dream

May 14 and 15, 2009 – two days in which Chrysler and General Motors, with the help of the government, literally stole the life’s work from nearly 2,000 business owners.

Two years later, the history from the dealers’ perspective of those days are hitting the bookstores. And they are must reads for anyone associated with the automotive retail industry.

The first book out this…

This week I will be blogging from the Digital Dealer Conference & Exposition for both www.automotivedigitalmarketing.com and www.DealerElite.net.

The conference has become the place to be for anyone involved in automotive retail on the digital side – and that includes just about everybody today who interacts with dealerships.

I believe the conference is on…

Penske Closes the Gap with AutoNation

The Penske Automotive Group is catching up to AutoNation in the total revenue department. A few years ago, AutoNation was generating about $20 billion in annual revenue, while Penske was at about $8 billion.

Penske has narrowed the gap considerably generating $10.6 billion last year to AutoNation's $12.4 billion ($12.5 if you round up). And now Penske has added about $257 million worth of revenue with today's acquisition of Crevier BMW in Santa Ana, CA. Crevier is the fifth…

A Trip Down Memory Lane...

Here's a question -- what's the craziest or most clever marketing scheme you've seen from a car dealer?

Some of the old giants in the industry -- Jim Moran, Cal Worthington, Earl Muntz andcountless others -- put together some wild and over the top marketing schemes. Moran probably was the first dealer to advertise on TV with a variety show and his sponsorship of a wrestling show in Chicago long before he created JM Enterprises, the largest Toyota distributorship in the…

They don't make them like Red McCombs any more. Billy Joe (B.J. or Red, as he known) is a legend -- not just in automotive retail -- but in the history of American business.

When you have a few minutes, check out Brad Wernle's profile of MCombs in Automotive News. Wernle is one of the top reporters in automotive and does an awesome job of capturing…

College Grads Don't Want to Work in a Dealership -- How Can We Change That?

What's the automotive retail industry's greatest challenge? According to several top selling dealers I've talked with recently, the answer is the negative perception the public has about car dealers.

Their concern isn't focused as much on what the customer thinks, but more so on what potential…

How Important is the Facility to the Sale?

Ford Motor Co. began talking to its Lincoln dealers last year about the investment they would have to make in their stores if they wanted to continue selling Lincolns. A meeting last week in Detroit with approximately 120 Lincoln dealers…

Here's a question: Which four U.S. market brands are tied for the longest consecutive streak of monthly year-over-year sales increases? The streak now stands at 20 months.

It's a great question and the answer is probably not the brands you think. I wish I was clever enough to have asked the question, but I'm not. Eric Mayne, senior news operations editor at WardsAuto.com posed the question today in his blog,…

May Sales Drop – A Blip or a Trend?

May Sales Drop – A Blip or a Trend?

Just when we were beginning to feel good about the auto industry following eight months of sales growing by percentages in the double digits, sales plunged in May, down 4% from May of last year.

The question is whether the drop will be a trend the rest of the year or a “minor” disruption for a couple of months. The major challenge is lack of inventory resulting from the earthquake in Japan earlier this year. The lack of inventory has led to…

Apparently, some  dealers are keeping the $7,500 tax credit provided by the federal government for buying a new Volt. The practice is creating a little bit of heartache for GM.

I say, apparently, because of a report earlier this week in the National Legal and Policy Center seems to indicate it might be happening.

In a New York Times blog…

Kniff Rides to Get Rid of Cancer

I'm posting an email that my friend Shaun Kniffin (from the Germain Group) sent earlier today. He's an avid bicycle rider and will be participating in a 100 mile trek created to raise money to help in the fight to end cancer.

You can learn more about the cause by clicking…

Remember that girlfriend or boyfriend that was just too clingy for you? Insecure, always seeking approval, or going overboard in trying to make you happy? Or worse yet, one date, and the person treats the relationship as if you're married.

Apparently, Toyota has the same problem -- only it's the one in the relationship being overly clingy, according to Stanley Bing, columnist for Fortune magazine.

He recounts in his latest column,…

Longtime New Jersey dealer Donald Toresco, an elite dealer in our industry, passed away Sunday at age 71. He opened his first dealership in the early 1970's -- Dodgeland, U.S.A. -- which became one of the top selling dealerships in the country.

Toresco renamed the dealership "AutoLand" after adding several franchises during the 1980's. In 2010, Toresco Enterprises ranked as the 76th largest dealergroup in the country according to the… Continue