but he was also aware of the importance of having a good reputation.

He explained the difference this way:

The shadow is what we think of it; the tree is the real thing."

Put another way, your reputation is what people think of you.

Your character is what you actually are.

In a world preoccupied with image,

it's easy to worry too much about our reputation and

too little about our character.

Building a reputation is largely a public-relations project;

building character requires us to focus on our values and actions.

What we're looking for is moral strength based on ethical principles.

Character is revealed by actions, not words,

what we should do and

when doing the right thing costs more than we want to pay.

Our character is revealed by how we deal with pressures and temptations.

But it's also disclosed by everyday actions,

including what we say and do when we think no one is looking and we won't get caught.

tells more about our character than how we treat people we think are important.

People who are honest, kind, and fair only when there's something to gain shouldn't be confused with

people of real character who demonstrate these qualities habitually, under all circumstances.

Character is not a fancy coat we put on for show.

It's who we really are.

~This is Michael Josephson reminding you that character counts. 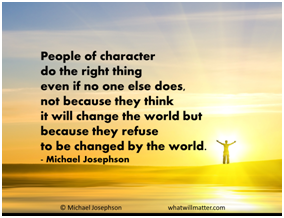 We all have our own demons. Our demons can be something from as little as an unorganized sock drawer to something that is life changing. A demon is what each of us holds within that resists reason for change! Thanks I love reading this when I start my day! This is the only way to start the day!