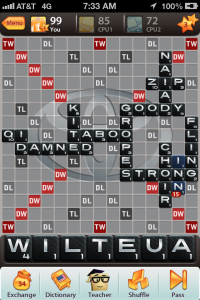 Scrabble players found a new twist to the game today*, which is a bit weird to begin with being April Fools and all.   Everyone in my household with the exception of my husband has a bit of a competitive nature, so we love Scrabble and often play the Super Scrabble board game.

So back to the new twist. I play Scrabble on my phone. I usually have at least 10 games open all the time all with random opponents, and it's not unusual for me to also have a computer game going as well. This morning when I opened it I was prompted get the new board. Scrabble has had a shopping cart on the main screen for several days now indicating that they would soon be moving to a "paid" program of some type. Everyone eventually gets there if they want to make money What I didn't know was how Toyota was going to be involved.

As you can see the new board is branded for Toyota. But the promotion goes much further. If I play any of the Avalon words provided 3 times I will permanently win the Luxury Board, the tiles and access to Tile tracking (a new feature Scrabble will soon be charging for).

Let's break down what this Toyota promotion is doing:

Now, I'm not a Toyota gal, never have been, not very likely to be, but I have to give Toyota kudos for the integration of this marketing campaign.

As interesting as it is, the real question is will it influence any buyers and more importantly how would they every know if it did?

Do you think anyone at a dealership level is going to uncover that an prospective Avalon buyer has been playing Scrabble on their phone and that's how they were influenced to buy?

And even if by some miracle they did uncover it, those details would never make it back to a manufacturer. Will Toyota measure the effectiveness of their campaign by how many people play the words to claim the new board and feature, or just how many pull the first board down but don't "win"? How does that equates to anything more than people who love to play Scrabble?

Any other great automotive gaming examples and what do you think they are(were) effective for?