FREE Webinar -- Expert Panel: Prospecting, Selling and So Much More 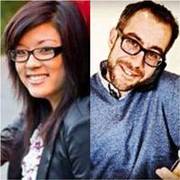 Want to make more money?? Of course you do!!

Join us for this special 1 hour webinar with experts Elise Kephart & Robert Wiesman, arguably two of the most impressive and successful salespeople in the auto industry today, as they share their experiences and recommend cutting edge strategies that are sure to have a direct and swift impact for your dealership.

You’ve probably heard about them and/or read about them…and now you will have the opportunity to ask Elise & Robert your most pressing questions. Hear what they have faced and how they addressed and overcame those problems and, most importantly, come away with insightful and actionable things you can do to improve your bottom line immediately!

This presentation is for people who are ready to take their prospecting and sales to the next level. Don’t miss this opportunity to hear from the BEST of the BEST on how to dramatically improve your prospecting, sales and so much more!

PRESENTERS: Elise Kephart is a sales and marketing phenomenon in the automobile business and is nationally recognized as “The YouTube Diva”. Since 2007 Elise has sold thousands of vehicles through personable and persuasive sales and marketing. Elise has presented at seminars nationwide, including the Spring 2012 Digital Dealer conference in Orlando, where she has consistently ‘wowed’ the audience by teaching how to create and edit quick and effective videos and deliver them to customers within minutes. Elise has been repeatedly praised by the likes of Digital Dealer Magazine, Jim Ziegler and Grant Cardone for her creative marketing in the automotive industry. She’s even traveled across the country with Jim Ziegler training internet departments. Elise is currently a top performing Salesperson at Sunset Honda and she can be reached at elisekephart@yahoo.com.

Robert Wiesman is Director of Online Operations for Buchanan Auto Group which operates a total of 7 locations throughout MD and PA. Robert took the automotive industry by storm August 2010 making six figures in the first 12 months in the business. In December 2011 the “Robert Wiesman” brand was launched online and “Your Hyundai Guy” was born. Robert quickly gained national exposure and started helping other sales professionals across the country build their own “personal brand”. Robert has won several national contests for automotive professionals for his “outside the box” approach and strategies. Robert is a regular contributor to automotive trade magazine “AutoSuccess Magazine” and an expert panelist at the Internet Sales 20 Group. Robert Wiesman is a dedicated and committed student of the automotive industry and he can be reached at robertwiesman@gmail.com.

RSVP for FREE Webinar -- Expert Panel: Prospecting, Selling and So Much More to add comments!