By the traditional canons of business, some of the things that are going on here on DealerElite might be classified as true madness. It’s no secret that most of us are competitors – we’re selling the same cars and we’re fighting for the same customers, nevertheless we’re really friendly and help each other out constantly.

What’s going on? This is how social networks have changed the way we see things. We’ve come to realise how the Law of Reciprocation and the more ethereal Law of Attraction work to help us promote our businesses.

Let’s look at some examples how building an automotive community or participating in one can make a huge difference for our content reach.

If you’re active on Twitter, you’ll know how difficult it is to get those retweets and responses. Even if you’ve got thousands of followers and some of them click on a link within a tweet, most of them won’t have enough motivation to retweet. Now, if you could get your competitors to retweet your stuff, wouldn’t that be amazing?

Last October a company called MyCityMotors created a new Twitter hashtag - #MCMotor. Then they spread the message to car bloggers and online car sale room owners encouraging them to lay the foundation of what became a new car community.

The participants use this hashtag whenever they post motoring-related content. The other community members monitor the hashtag and retweet the messages. This collective approach has made some of the community tweets go viral. At the end of each month they announce the Hashtag King (or Queen) based on the retweets and other activity.

There are also a few hashtags used regularly by members of DealerElite and other car communities such as Motor TradeBook – the most popular being #CarPeople, #AutoMarketing and #CarBiz. If you check the corresponding Twitter streams, you’ll see that generally it’s a lot of fun and the best tweets show a good level of interaction.

Another hashtag to watch is #MotorHappy. It’s a good way for the motor trade to tweet positive stuff. 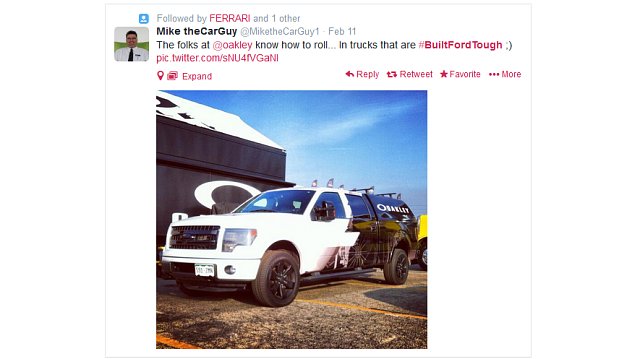 It’s not unusual for a car manufacturer to try to launch a hashtag and build a community around it. The problem is that most of them get it wrong by making the hashtag too blatant or too boring.

A good example is #BuiltFordTough. It’s quite an old hashtag and although it’s believed it was created by Ford, there’s no clear evidence, however, the large Ford dealerships keep using the tag occasionally and people haven’t lost interest even four years after the introduction. It was designed for people who want to show off the reliability of their Ford pickups and trucks.

This is a justifiable hashtag – the American Ford trucks are renowned for their longevity (200 – 500,000 miles on the clock is not out of the ordinary). The key is for the hashtag designer to understand the brand’s main strength and choose a hashtag that reflects it. If the same hashtag were used by a brand whose cars are known to break down often, they’d get sarcastic tweets instead of positive ones and damage their reputation even further.

The web has evolved through a lot of changes. There used to be a time when online chatrooms were the place to gather and communicate with people, then there used to be blog carnivals. At some point around 2008 my mailbox was bursting at the seams with invitations to join a carnival or solicitations to help promote a carnival. It has all died out during the last few years, or has it?

There are still blogs that do carnivals, like this one. However, I wouldn’t advise that people do carnivals because excessive interlinking within a network of blogs might be seen by search engines as "spamming" or "manipulation." This is not to discourage people from linking to other blogs.

By linking to related high-quality resources, you’re adding value. That’s why prominent bloggers are using roundups as a next step up from carnivals – to share what’s hot within their communities, to spread some link love and to build relationships with the movers and shakers.

The Examiner.com occasionally do roundups. This is a good example of an automotive one. These posts usually get a lot of interaction.

You might want to try doing weekly or monthly roundups by curating content from within your community. If you do, make sure you get in touch with the bloggers whose content you’ve featured in your roundup – they’re likely to help you promote the posts because it comes natural for a person to want to return a compliment.

When Facebook groups were announced in 2007, I remember I was rather excited. It sounded like a great way to get people raving about a particular topic under "one roof." It would also give content marketers a much more convenient tool for outreach because prior to introduction of the Facebook Groups, the only "bulk" element was being able to invite your friends to "Like" something.

Now you could post your messages on Group walls and catch attention of thousands or millions of users. Unfortunately, it didn’t pan out exactly the way it was expected. The development of Facebook Groups took a rather different angle and in many cases they’ve turned into spoof groups rather than interest groups.

If you look at the most popular Facebook Groups right now, and I mean groups that have hundreds of thousands or millions of members, the majority of them are dedicated to a cause – for example hating the new Facebook Layout or hating the new Facebook ToS. Another phenomenon is groups dedicated to Guinness records. The remaining large groups range from topics like promoting violence to grouping for the sake of grouping. Not very inspiring to say the least.

I haven't yet noted a general automotive group worth joining, however, you will find a few good niche groups where people are talking about particular makes or models. Those groups aren’t large – usually between 3 and 5,000 members but if you’re looking for targeted fans and have time to spare, might as well join a couple.

Although the interaction on single posts isn’t very impressive, you can use these communities to create friendships with other automotive professionals. It’s easy to add people to circles and build your following quicker than using a random approach. Another potential benefit is improving the authority of your own Google+ profile by posting on a Community wall.

Which automotive communities are you a part of?