Ask for Referrals? If I was the Dealer, I’d Prefer You Ask for a Little Yelp 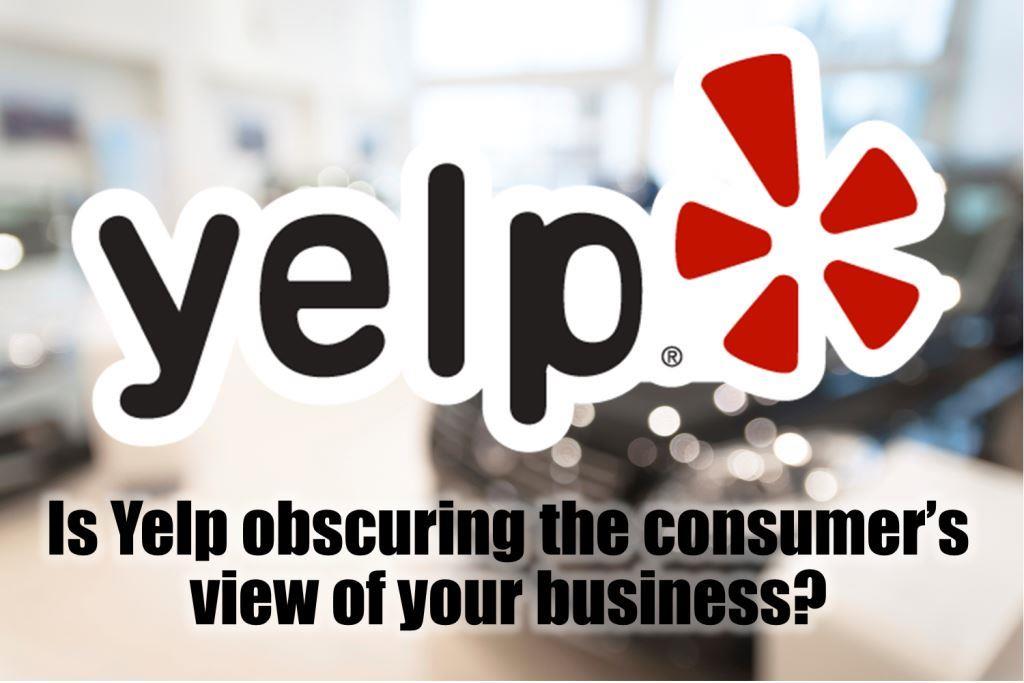 Among the many activities I complete in advance of a dealer consulting visit is a thorough analysis of their online reputation, as this can often help define much of the visit’s focus. During one such analysis this week, I discovered the following for an upcoming dealer visit (numbers have been estimated to protect the dealer’s identity):

I know this dealer does a relatively good job of asking for referrals – they even have a genuine, workable process around this – but if I were the owner, I’d prefer my team start asking for Yelp Reviews instead of referrals.

Asking for a little Yelp

As many of you know, Yelp can be very business- and even user-unfriendly when it comes to reviews. For this dealership, there are more than twice as many “Not Recommended” reviews as there are those that make up the public star rating of 1.5. Yelp, you see, has software that automatically decides which reviews have merit and which do not; and they even say these cannot be overridden by their own team of humans. (Yes, I believe this makes Yelp officially Cyberdyne Systems and their automated software is a beta version of SkyNet.)

Without getting into the weeds here, there are many reasons that the Yelp software will put a legitimate review in the “Not Recommended” category. One of the primary reasons we’ve discovered is when they believe the business has solicited the review. Of course, the easiest ways for SkyNet to know you’ve asked a customer for a review are (1) The customer was using your computer and/or WiFi to write the review; or (2) Your customer got to Yelp via a link you provided (whether in email or on a web page).

So what good is asking for a little Yelp?

The key for you and your team is to outsmart SkyNet – and not only can it be done (sometimes) the process is simple:

Each day, your best salespeople are tasked with identifying truly satisfied customers, and then asking for a review during delivery via a talk track like this:

SALESPERSON: Congratulations, Mr. Jones, I’m so happy for you and your family! You may not know this, but our business is driven by positive word-of-mouth from happy customers like you. Would it be too forward of me to ask if you’ll review us positively online?

SALESPERSON: Great! By any chance do you use Yelp?

If the customer turns out to be a registered user of Yelp, then the salesperson should ask if he wouldn’t mind logging in right now on his mobile device (preferably via the Yelp app) and giving you a quick review.  (Watching the customer complete the review ensures it will be 5-stars.)

If they’re not a registered user of Yelp, it’s up to you whether or not you want to ask for a Google or other review at this point. If you’re like this dealer, your issues are really Yelp-related, so I would just use your standard review-seeking process in the absence of an immediate Yelp review.

Pigs get fed and hogs get slaughtered.

One of my favorite sayings in business (because it’s true) applies to review solicitation (especially on Yelp): Pigs get fed and hogs get slaughtered.

This means that while getting one customer to complete a quick Yelp review on their own phone from your dealership will likely get past the SkyNet sentries, trying to jam 25 of these a day past them will probably get you slaughtered. So, your process should be that once a single 5-star Yelp review has been completed, no one should request another one for at least the remainder of that day.

The goal here is not to try to game Yelp – which is not possible – but to align your Yelp score with what is most likely happening at the dealership. In the case of this dealer, a 3-4 rating is probably warranted (as is reflected by the Google and DealerRater scores). To grow from a 1.5 on 50 reviews to a 3.25 would mean the dealership needs 50 more 5-star reviews and no more negatives. If they are able to generate just five of these per week, then they’re just ten weeks away from a 3.25 (assuming they also stem the tide of the negative Yelps they’re receiving by following a solid reputation management process).

But, why is this better than asking for a referral?

Let’s be honest, okay? Unless your salespeople are averaging 25+ cars each per month while seeing relatively few Ups, THEY AREN’T ASKING FOR REFERRALS TODAY… or, they’re not very good at. Either way, continuing to do things the same way and expecting a different outcome is a form of insanity.

Referrals are important; and if I were selling today, I would work referrals as hard as any other sales weapon in my arsenal. But, your online reputation is critical; and a 1.5 rating on Yelp is costing you business that you will never know you lost! So, until your Yelp score rises to a satisfactory level, 5-Star Yelp reviews are more important than referrals – even if your team is already doing a good job asking for referrals.

I am so glad you asked that! Absolutely! In fact, that’s exactly what I would do if I was selling cars today!

Asking for the Yelp review first does not mean you cannot ask for a referral later. As anyone who knows how to properly work their referral funnel will tell you, it’s easier to get multiple referrals from one customer than it is to get one referral from every customer.

The rationale works like this: helpful people want to keep being helpful. If they’re already written a 5-star Yelp review for you, they’re even more likely to provide you with a referral or two; so don’t think that just because you asked for one favor it doesn’t mean you cannot ask for another!