Google +Post Ads Take the Social Network Out Onto the Web 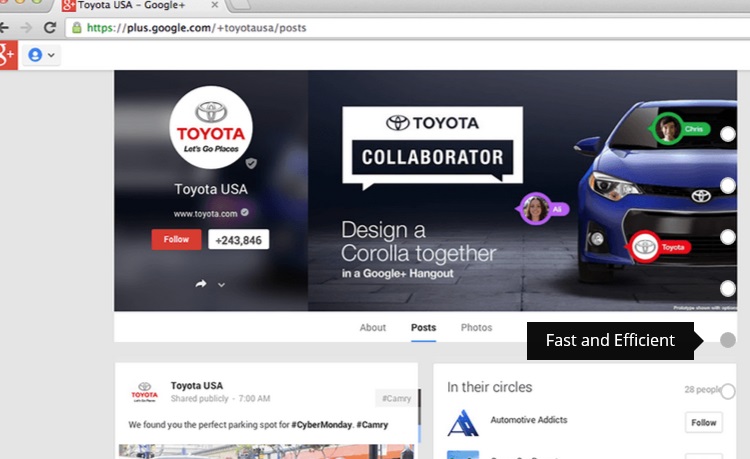 The next age of advertising is right around the corner. With Google's announcement of +Post ads, we now have a venue through which to advertise and garner true interaction from people as they surf the web. Think of it like Facebook advertising that reaches beyond Facebook - WAY beyond Facebook. With millions of websites out there that display Google ads, this expands the business footprint of Google's social network in ways that Facebook will likely never be able to touch.

+Post ads take Google+ posts and display them on various websites. The example they use from their pilot programs is Toyota who used these ads to promote the launch of their Corolla earlier this year. They took Google+ posts and put them as ads on automotive sites like Autotrader as well as non-automotive sites that likely had a demographic or retargeted preference towards Toyota specifically or automotive in general.

Rather than just a plain banner that took people to the Toyota website or a landing page, the ads were interactive from the websites themselves on which they were found. If someone wanted to interact with the ad or Toyota in some way, they didn't have to leave their website. They could comment on, +1, or share the post directly from the website without having to go to Google+.

This opens up doors for businesses to be able to truly interact with people much in the same way they're doing on Facebook right now. The difference is, of course, that it's not a walled garden. People will see the ads on many of the websites they visit and be able to engage with companies directly rather than having to click thru or visit the social network itself.

The possibilities are limitless. The potential is high. If Google stays true to this direction (and there's no reason to believe that they'd make a fatal pivot) then this is going to be one of the most powerful forms of advertising that businesses can use. Small, localized businesses will gain the most benefit if they handle it properly, but big brands will be able to get traction with their own launches and offerings as well.

We will keep you updated. In the meantime, it's time to get your Google+ pages in order, active, and worth your customers' attention. Here's the video describing Toyota's trial: