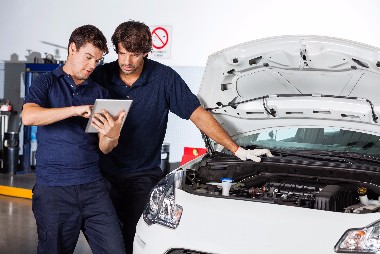 One challenge in many dealerships is building an environment where teamwork thrives. Salespeople are focused on their own individual commissions, not the stores; technicians are focused on the billable hours they produce, not the departments; and F&I managers want their penetration and back-end gross to be high. Aside from management, there’s a simple reason to explain why departmental self-interest reigns supreme at most dealerships - there is no incentive for them to promote the brand as a whole. Even the best company culture can suffer with these dynamics.

To that very point, a recent article in Automotive News tells the story of a dealer in Florida who embraced an OEM initiative that suggested technicians work in pairs. Initially, the initiative probably seemed like a bad idea to the technicians, as each job’s billable hours would be split amongst the two techs. On the surface, it may have looked like this method would lead to less money for each tech… but they were wrong.

Since Bozard Ford-Lincoln began this initiative, their service department has doubled its productivity from an average of 1,500 ROs per month (prior to their Quick Lube opening), to 3,000 ROs per month. The dealership is now processing an average of 5,600 ROs per month! Technicians discovered, that by working in pairs, they can be more efficient and increase production. So, even though they split each job, they end up making more money.

With two technicians working on the same vehicle, there was an inherent checks and balances built into the system. More conducive to the technician, the oversight was in a peer-to-peer environment, rather than from a supervisor or some other heavy-handed measure. It also allowed individuals to learn from one another and share their strengths. One technician might be very adept at brakes, while another could offer insights on a radiator flush. This environment offers employees a chance to teach, as well as learn, as part of career fulfillment.

Bozard’s success is an overall win for the dealership and its customers. Prior to the team implementation customers waited 2-3 hours for an oil change. The dealership now considers it has done a poor job if that time exceeds an hour – from the time that customer arrives until they drive off in their nicely washed vehicle. In addition to an increase in CSI, turnover in service has decreased (from 20% prior to the program to just 3%); service bays have opened up, allowing increased shop capacity; and company culture has improved due to a tighter sense of camaraderie.

Turnover is a huge problem in dealerships. While the sales department gets the spotlight in the industry with a 70%+ turnover rate, as recall work increases, demand for qualified technicians will also increase. This will cause dealerships to start wooing technicians from competitors, contributing to an increase in turnover.

And let’s not forget the most important asset to the dealership – its customers. This turnover not only affects company culture, but also customer experience and satisfaction. Who doesn’t like to see a familiar friendly face when they visit a business they frequent? It’s like the song from the classic TV show “Cheers” -- “You want to go where everybody knows your name.”

It appears that Ford’s model provides benefits that do not take shape often enough in a dealership’s service department. Today, many customers are left with less than ideal outcomes. As dealerships increasingly compete with independent repair shops, a team-based approach might yield the kind of service experience that overcomes the negative perception today’s average consumer has of a dealership service department. In fact, teamwork might prove to provide a level of customer service independent repair shops can rarely attain. It’s this differentiation dealerships are searching for in today’s highly competitive service landscape.

If teamwork and good processes can make such a drastic difference in the service department, what effects could it have in other departments? It seems that Ford may be onto something.