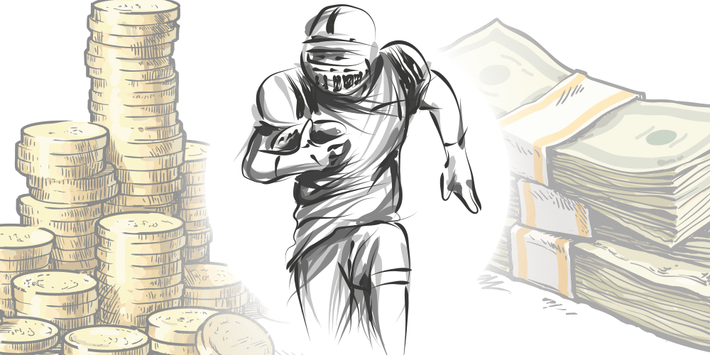 Tom Brady makes $15 million per year. A few months ago Dak Prescott turned down $30 million a year. Financially speaking then he’s at least 2x the value or the player Brady.

Touchdowns. Interceptions. QBR. Percentage of completions. The numbers are endless, but let’s focus on percent of salary cap for a moment.

Cowboys owner and general manager, Jerry Jones, is calling a deal, “Imminent”. Whoa, Cowboy! That’s 2.5x more of the Cowboys pot of gold than the Patriots pot of gold for what is arguably the game’s biggest winner ever in Brady.

Dak’s great. He’s just not going to, with a $30-40 million dollar deal, be closing in on 6 Super Bowl Rings and 3 league MVP awards any time soon. There’s a method to the Patriot Way.

Brady’s worth more, but in the NFL landscape, extra money matters most in terms of building your best roster. Brady has plenty of money. Supermodel wife Gisele Bundchen earned $30+ million in 2016.

Dak, albeit to a lesser degree, does, too. With over $50 million in endorsements from the likes of AT&T, Adidas, Pepsi, Tostitos, Beats by Dre, Campbell’s Soup and others his cash flow is headed in the right direction.

Unfortunately for the Cowboys, Dak’s rookie deal squarely puts in him a place of being underpaid.

Just like in the highly competitive automotive industry you need key players positioned properly throughout your organization in order to make the machine run. One, or even two, superstars in football don’t get you where you need to be.

Just ask Brady. The ultimate tell-tale would come when in a Cowboys vs. Patriots Super Bowl match-up the Patriots end up winning. Not directly because of Brady or Prescott, but because of the talent around them.

FREE WEBINAR: Creating a Better Dealership Experience for All!