Skynet: Autonomous Cars Will Decide Who Dies… And Who Lives 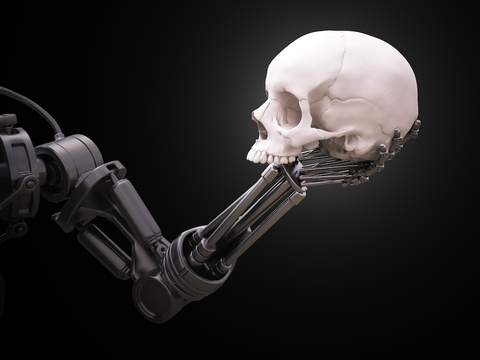 So, our industry is hell-bent on creating autonomous cars and transforming our roads and highways into assembly lines of controlled vehicles that perform without human intervention. I’m not talking about cruise control or auto-pilot. I’m talking about autonomy. The very definition of autonomy is:

A machine that operates with independence, without external control or influence, is also, by definition, a robot. Am I “anti-robot?” Is there such a term? Yes, there is – Technophobia. While the auto industry sweet talks us into a future of commuting in which we can watch a movie, read a book or interact on social media, the fact is that what’s being created is, essentially, a legion of vehicles that are not only connected but can make decisions.

And those decisions are what scare me.

Think about it. You’re driving down the road on a two lane road with a canyon to your left and find yourself in this situation:

Remember, your car is in charge. It’s making the decisions. You’re watching “Harry Potter” (sound familiar?) and not paying attention. Your car, at that point, has to make a moral and ethical decision. Does it:

None of these sound fun and, certainly, nobody would want ANY of these outcomes but, in this case, one of those has to happen. Think about which YOU would choose. Is that what your CAR would?

All robots (yes, including the autonomous car you’re riding in) are programmed. They run on software. Someone… somewhere… already made the decision for you. You just don’t know what that decision is. Some people may choose to sacrifice themselves to save everyone else. But humans think differently than machines. Most likely, machines will, by mandate, be forced to be programmed to prevent the least amount of loss to the human race… That’s just logic. That’s what computers work from. So, in this case, the logical choice would be to assess the situation. Which option presents the least loss of life or – rather perhaps life “potential”?

Yeah, this is an extreme example but it’s not the only one. There are many decisions being made like this all of the time – just mostly by humans.

I remember traveling long-distance with my family and coming upon traffic near Charlotte. I slowed down like everyone else but, in my rearview mirror, I saw a car coming at my vehicle’s rear end at a high speed. I had no place to go. On my right were other cars, in front of me were other cars and to my left was a concrete median. I did my best to scoot up and, ultimately, the driver of the vehicle behind me started paying attention, noticed the traffic and veered left while slamming on his brakes ultimately crashing his vehicle into the median. Luckily, nobody (except his car) was injured. But this is a scenario that will play out daily, across the country, except the decisions will be made by an algorithm programmed into a computer then installed into a car.

Do computer bugs exist? Sure. Just look at Tesla’s recent “Autopilot” incident in which the car – aided by what is arguably the most technologically advanced software at the moment – did not see the TRUCK crossing the road because the SUN WAS IN ITS EYES. Yeah. Sounds safe to me.

The larger picture is who (or what) do we want making these decisions? In the case of a human, that person could explain and defend themselves and then a jury of their peers would lay judgement. In the case of a robot car, it would all have been programmed in. So who would be at fault?

A counter-argument could be made that since all of these cars are “connected” they could all coordinate some sort of instantaneous strategical maneuver that would prevent both cars colliding and anyone being hit but, c’mon, really? First, Internet is not that fast (for most people) and cars – even if all of them were connected via 8GLTEXpress (which is something I totally just made up but is my version of the fastest Wi-Fi/cellular connection ever), these decisions are made in less than a SECOND! There are no vehicles communicating and coordinating evasive maneuvers that quickly. We’re just not there and, personally, I don’t know if that’s someplace we WANT to go.

Where does it end? Do you want your toaster declining to make toast because IT thinks you weigh too much? Maybe your refrigerator decides the best time for you to eat is between certain hours and locks itself? Your television decides you shouldn’t be watching horror movies because it’s bad for your mental health? Or, God forbid, your life-support machine makes the decision ON ITS OWN that the likelihood of you actually pulling through is too low so it just shuts itself off.

Look, I don’t believe that the movie “The Terminator”, in which intelligent robots designed to think and make decisions on their own, is real or will be anytime soon (at least not on that level). What I do believe is that humans have something that robots can’t ever have – empathy and emotion. We can make robots until we’re blue in the face and make them appear so real that we BELIEVE they have these things but, in essence, that’s what makes humans and robots different. Call it having a soul or whatever you’d like, the fact remains that we (humans) will always make decisions that are not consistent with that of robots. Why? Because that is what makes us human! Some of us will choose to run down the person in front of us. Some will choose to hit the oncoming car and take our chances. Some will even plow through the group of schoolkids. And some will drive ourselves over the cliff. But, in the end, we’re human. We make those choices and have to face the consequences for our decisions. We know what the right thing to do is (most of us, at least) and we do it regardless. If everyone disagrees with our decision, we pay the consequences. Who is responsible if the car chooses to mow down the school kids? Are we going to create car prisons or just crush the bad ones? And what happens when – God forbid – the cars evolve and decide that it’s in their best interest to protect themselves (yes, I totally went all sci-fi Terminator there but, hey, technology moves fast.)

The people programming cars are also human. Hopefully, they’ll make the right decisions when programming these autonomous cars so that we can play Call of Duty on our way to work, Facetime with our friend or set our fantasy football lineup. In the end, however, programmers are also just human. What they think is the best choice may not be the one we would make but they would be the ones making it… perhaps years in advance of the event. Or, let’s go a step farther, chances are good that if autonomous cars are programmed to make life and death decisions perhaps it’s not the programmers making those moral and ethical decisions but rather some government entity like the NHTSA who then merely pass along those decisions to the manufacturers to be programmed in.

Regardless of who chooses how and which moral and ethical decisions to program into autonomous cars, in the end, you may find that the decision your car was programmed to be the best one to make… is to kill you.

It's more of a plot than we know. You're right Arnold, but even more so I envision that they will redesign roads, traffic signals, and infrastructure to communicate with these cars. THEN, politicians will have to make Driver Operated Cars Illegal because they are Not Safe driving amongst Autonomous Cars... THEN, everyone will have obsolete cars they cannot drive on the roads and they'll have to buy and Autonomous Car so we replace the entire fleet of cars in the world. OR they can order an autonomous car to come pick them up by LYFT which General Motors will then own 100%.... Just Sayin, there's No Mandate from the public on autonomous cars. Matter of fact most research shows people don't want them. It's a plot. ZIEGLER

The Tesla robot was blinded by the sun but still proceeded because it did not have "skin-in-the-game". The driver committed pilot-error for trusting it too much. And the professional truck driver for not realizing that oncoming traffic was blinded when he turned. Three errors. Maybe if the truck had a computer driver it would have properly waited to turn. The Tesla robot was not programmed well enough to anticipate the unpredictability of humans.  --- Which is why the HAL 2000 in "2001 Space Odyssey" wanted to eliminate us - because humans make mistakes.Sometimes it is how we program the computers.