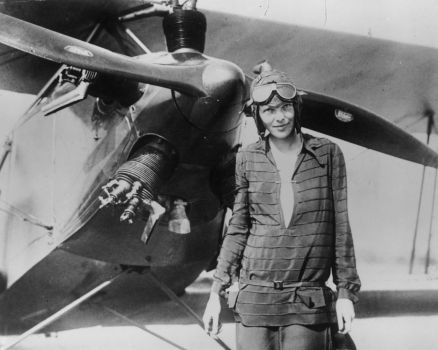 Note: Thanks to AutoSuccess Magazine for allowing me to be their guest blogger this week.

Amelia Earhart, the first woman to fly solo across the Atlantic, had a saying painted on the side of her airplane; “Always think with your stick forward,” which means do all the thinking you want as long as you’re moving forward.
My offensive line football coach in college had a theory very similar to Ms. Earhart’s. When the ball was snapped, Coach Fremin had 2 simple rules:
#1) If you forget the play, don’t just stand around; go hit somebody-anybody from the other team.
#2) Play until the whistle blows because you’re more likely to get hurt when you’re standing around the pile.
If you’ve spent any amount of time in the sales profession, you’ve seen variations of sales careers that have either never gotten off of the ground or were once soaring careers that stalled in mid-flight and crashed in a fiery demise. Regardless of which extreme- unhappy endings come when you are not thinking with your stick forward.
Here are a few ways to keep your stick moving forward.
Stop Looking For Perfection : Stop waiting for the perfect opportunity. Opportunities aren’t luck, they're revelations and are discovered only by those who are tenacious enough to keep digging, scratching, clawing, and scraping their way to success. As long as they're making new vehicles, you'll never be perfect in your product knowledge or negotiating skills nor will you ever find the perfect customer, inventory or management staff. Perfection is another word for procrastination; we procrastinate because we fear failure. Whatever you fear, run towards it. You want to get better on the phone? You want to close more deals? You want to be able to control your sale better? Then take action-you’ll never be perfect, but where others become bitter with each failure, you'll become better.
No more chalk talk: No team wins a championship simply by the plays that they design-every play put on paper is designed to be a win. But what is designed in practice is refined in play and it’s learning from the setbacks and unforeseen circumstances that allow you to win. Like children, we pout when things don’t go our way; when a customer doesn’t buy, hangs up on us, or buys elsewhere we sit down and pout- all because the play we designed was supposed to work but didn’t. Pick up your lip, and get back in the game. When will you win again is not the question; the better question to ask is how long will you sit in your loss?
They’re not your problem : You’re the problem not anyone or anything else. The best place to look when things aren’t going your way is the mirror. You’re not a tree, if you don’t like where you are then get off of you ass and make a move. You couldn’t help where you came from, but you can help where you’re going. If you’re overweight, have bad credit, an alcoholic, or sell 5 cars per month, you have to own it and take the necessary steps to be slightly better than you were yesterday.
Bonus: I know I said a few, but there is a 4 th
You’re worth it: Enough said.
Most people live in the 8th day of the week: Someday. Someday I’ll get my big break; someday my plans will come into fruition; someday someone will see that I’m being cheated. You’ve got 24 hours to make the most of this day-you don’t know how many more minutes, days, weeks, or years that you have left to play this game called LIFE, but one thing is certain. You have now and it’s called “present” for a reason.
Think with your stick forward.
I’ll see you next time on the Blacktop.

Brian thank you for taking time out Sunday to read and share your thoughts. There's nothing "cutting edge" to life other than at times we stray from the basics.

Life's not hard, circumstances are what make it hard-and how we handle those adversities determines our altitude in life. Thanks again for sharing your feedback support, Brian.

Good job, Marsh.  A really entertaining Sunday afternoon post.  I must admit, when you startled me by asking "Where's your stick," I immediately grabbed my pants to make sure it was still there!  Whoa, talk about a reflex action!  Because it was you, I continued on to read (and consider) the entire post.  All of your points were good, but they didn't cover any new ground for me.  They were all familiar as I've used them for those many times when I've needed some good old-fashioned self-flagellation.

Your "Come to Jesus" style is solid and traditional, but what impresses me the most is your conviction.  It's really believable considering you're a dealership GSM and your post wasn't some prelude to a pitch about your new "Self-help/Improve your life" book/course/webcast/etc.  It would be interesting to sit in on one of your sales meetings down there in Saint Charles.  I'd bet when you "let loose" with one of these babies, all of your MOPAR reps start calling you "The Good Reverend Marsh."

Aeronautically, I think moving your stick forward puts you into a dive.  I do kind of understand what you mean, though, as I've spent countless hours moving my stick forward and backward trying to get to that "magical altitude."  Serious though, I've mentioned before your posts indicate that as a GSM, you're a "cut above,"  That still holds true.  My only suggestion would be to dump the sporting analogies.  Everyone's doing them.  Google up "War Heros" and you'll find some feats of valor that will substitute nicely for the sports stuff, and they're "life and death" rather than just "losing the game."  Your last statement was masterful!  "Think with your stick forward" has proven to be the way I've lived my life and I wouldn't want to change a minute of it!

Another exceptional post Marsh! Moving forward towards failure...that's is precisely where success is. If you don't like where you are going...change the your direction by taking action.  Chances are, the 5 car a month guy or gal isn't reading this post and that is unfortunate.  We all gain wisdom and inspiration from the knowledge that is imparted upon us in blogs, video's and books.

Someday....becomes never-day if you choose to do nothing about your dreams. Embrace the concept that one action performed consistently can produce massive results.  it may not be apparent today but over time the results are immeasurable.   Thank you for your spirit and inspiration and keep those positive articles flowing because you are making a difference!

Comment by Marsh Buice on June 18, 2014 at 8:57pm
Stan, it's on "you." The person that's holding us back is ourselves. We allow our thinking to inhibit our forward progress. Thanks for reading and commenting sir.

Great post. Every time I find myself stopped moving forward, I realize it's only because I've stopped in my efforts. There's a saying...if you find yourself against a wall, either go over it or around it.