Is Your Sales Prevention Department Hard At Work? 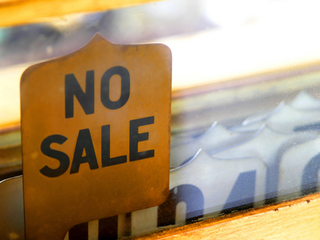 The wife and I went out for breakfast over the weekend. Our waitress was so unfriendly that I almost didn't want to buy breakfast, and I was hungry! But our experience reminded me of a couple things that happened recently that I like to call "sales prevention." And I do think some of the activities in this new department are responsible for the slump in many people's businesses.

Many of you know I started my own company a month or so ago. A few weeks ago, I was out looking to purchase business cards for my new venture. The salesman from the print shot kept telling me that the things I was asking for "were going to be expensive." What he didn't take into account was the fact that he's used to seeing pricing on business cards. I'm not. So I have no idea what's expensive and what's not. I had my own pre-conceived notions of what I was willing to spend, but I can't really tell you that I know how much the average business card costs.  I knew that I wanted business cards that would stand out, be memorable, and that I was willing to pay to get what I wanted. He also didn’t know how stubborn I can sometimes be about getting what I want.

When I got the quote back and ended up getting exactly what I wanted, it was actually less money than I thought it would be. He definitely could have tried to upsell me on some different finishes, coatings, die cuts, whatever. But, he had a preconceived notion of what he thought was expensive and he transferred that notion to me by talking about it. He would have been better off asking me what my budget was or at least asking some additional cursory questions before he began. Instead of finding out about my needs and wants, he assumed he already knew them. And if you analyze your business, you may find that you or your employees may be making that same mistake unknowingly.

We often are of the mindset that our services are worth what we would pay for them. That is a big mistake because potential customers are coming to you from a completely different perspective. They don't have your skill set so they would actually pay more for your skills. We all think what we do is pretty easy, and we wouldn't pay someone much to do it (because we already know how ourselves). It's pretty silly really, but it's how most of us think. But we could likely charge people much more! The concept is called "price elasticity,” The price people will actually pay for what you have is usually much more "elastic," meaning the price ceiling in our heads if often wrong, and people are usually willing to pay much higher prices than we think they will. I had some logos designed for my new company and I paid far less than what I had estimated it would cost to get a professional graphic artist to make something original.

The second Sales Prevention Experience I want to share with you involves an online subscription I have that is paid automatically from one of my credit cards. That card expired and I neglected to update the new information with this e-zine provider. Because the card had expired, this provider sent me an email saying my card had been declined. The interesting part was that the email read, "Hey Al, if you want to cancel, you just need to let us know. If not, if you have another credit card please update that information on our website." Think about that. I had never mentioned one thing about canceling. For some reason, probably because they've been watching the news too much, they have gotten it in their mind that a lot of people might want to cancel because of the "down economy." And so they make that assumption and lead off their email talking about me cancelling. Well, now I am tempted to cancel because of their negative attitude, when all that really happened was I had forgotten to update my card info on file with them and needed to give them a new expiration date.

So, the bottom line is this, I want you to stop and think about what you and your staff are doing that might be increasing your sales prevention (i.e. killing your revenue) rather than increasing your customer acquisition, customer retention and customer loyalty. We have all heard the definition of “assume”. You need to look at your business and see what assumptions you and your employees are making that are preventing you from making all the sales you could.

Think about that for a bit, and let me know if you've got any sales prevention stories of your own!

I work with a contractor that tries to cut his pricing to what he thinks they will "Bite" at. Then he gets in trouble with things go awry and he has additional costs. If you give a fair assessment, ask questions, offer suggestions, then you can sell the client what they need, perform well and get additional business and referrals. I recently purchased a new car for my mother-in-law. Went in thinking fifteen thousand, walked out at 22k, great salesperson, he pointed our things I had not thought of, offered suggestions and I accepted most of them. Great sales guy, and I am thoroughly happy. Mother -in-law isn't, though she is never happy. Still can't sell her on me.

Comment by Pat Kirley on October 14, 2013 at 2:14pm
I think if we are honest we are all guilty sometimes, we assume the customer wants more than we are prepared to offer. We need to assume they will be happy with the price and the customer is unlikely to say "wow I was not expecting that much on my trade". Be positive give your best prices and sell the advantages of buying from X

Good post Alan. Reality is that a LOT of business have Sales Prevention Departments. Some are in the front, some are in the back, and many are answering the phones!

Recently, I was on Auto Mall Drive, not unlike the one near you. I had some free time and wanted to look at the new vehicles for 2013/14. I drive a Subaru STI and like sporty cars. I looked everywhere for a spot to park and it was very difficult, but I see one available and pull right in. The Sales people were playing inventory rodeo. They greeted me at my car, and proceeded to ask me to move it as I was blocking the spot he wanted to put a used vehicle. I asked if I could just talk to one of the Sales people first and with a very stern look, stated he needed to complete his task and needed me to move. I did move and love my new car from down the street.